After a substantial recovery in 2009 -2011, industry in Europe has slid downward again. Preliminary data for 2012 indicate that the contribution of manufacturing to EU GDP has fallen further to 15.1 %, increasing the distance to the indicative 20% target set forth by the Commission in 2012. If we want to reach this target and not lose the race against our competitors, more needs to be done on the EU level. This year’s European Competitiveness Report identifies the strengths to build on and the challenges to be addressed by industrial policy. It also steers the economic policy debate toward the instruments for improving the knowledge and productivity performance of EU manufacturing. The report also makes a strong case for preserving a critical size of manufacturing in Europe. Although its share in the overall value-added has been shrinking, manufacturing has a strong spill-over effect to other sectors - additional final demand in manufacturing generates around half as much additional final demand elsewhere in the economy. As in other advanced economies, it also still accounts for a major part of the innovation effort which translates into contributions to overall productivity growth and thus to real income growth.

The recovery from the most severe crisis in the post-war period has been uneven across EU Member States and industrial sectors. Few countries have successfully recovered their pre-crisis level of manufacturing output (Estonia, Latvia, Lithuania, Poland, Romania and Slovakia) while the majority are far below. 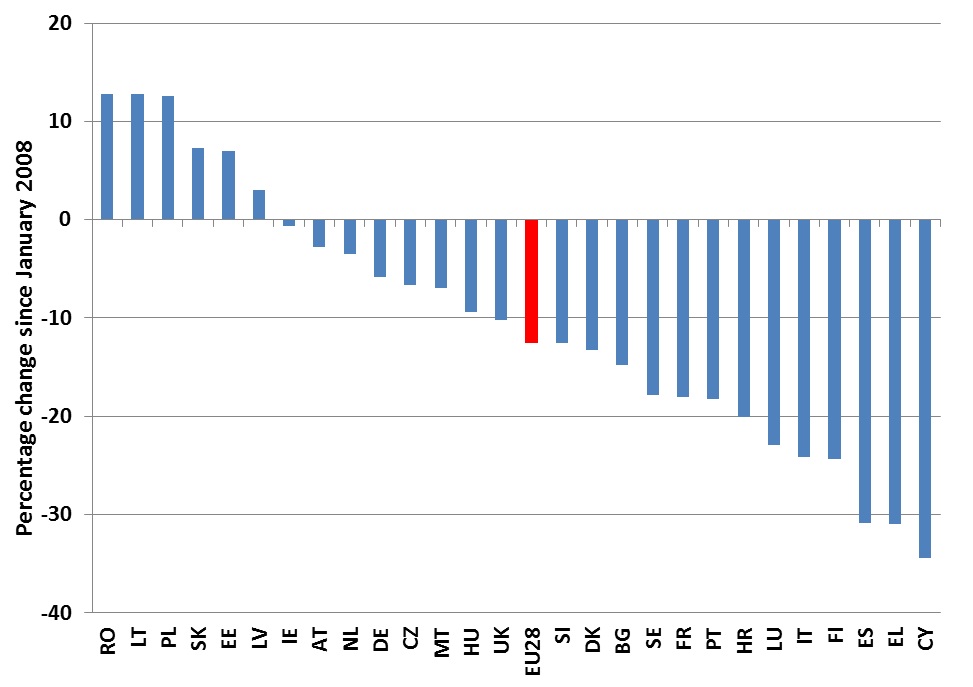 With the exception of necessity goods sectors and some high-tech sectors, the majority of industrial sectors have not yet recovered from the crisis. With domestic demand remaining weak, the recovery gains are mainly due to external demand (in particular for pharmaceuticals, metal ores and transport equipment).

Figure 2.Some industry sectors back on growth path, others still ailing 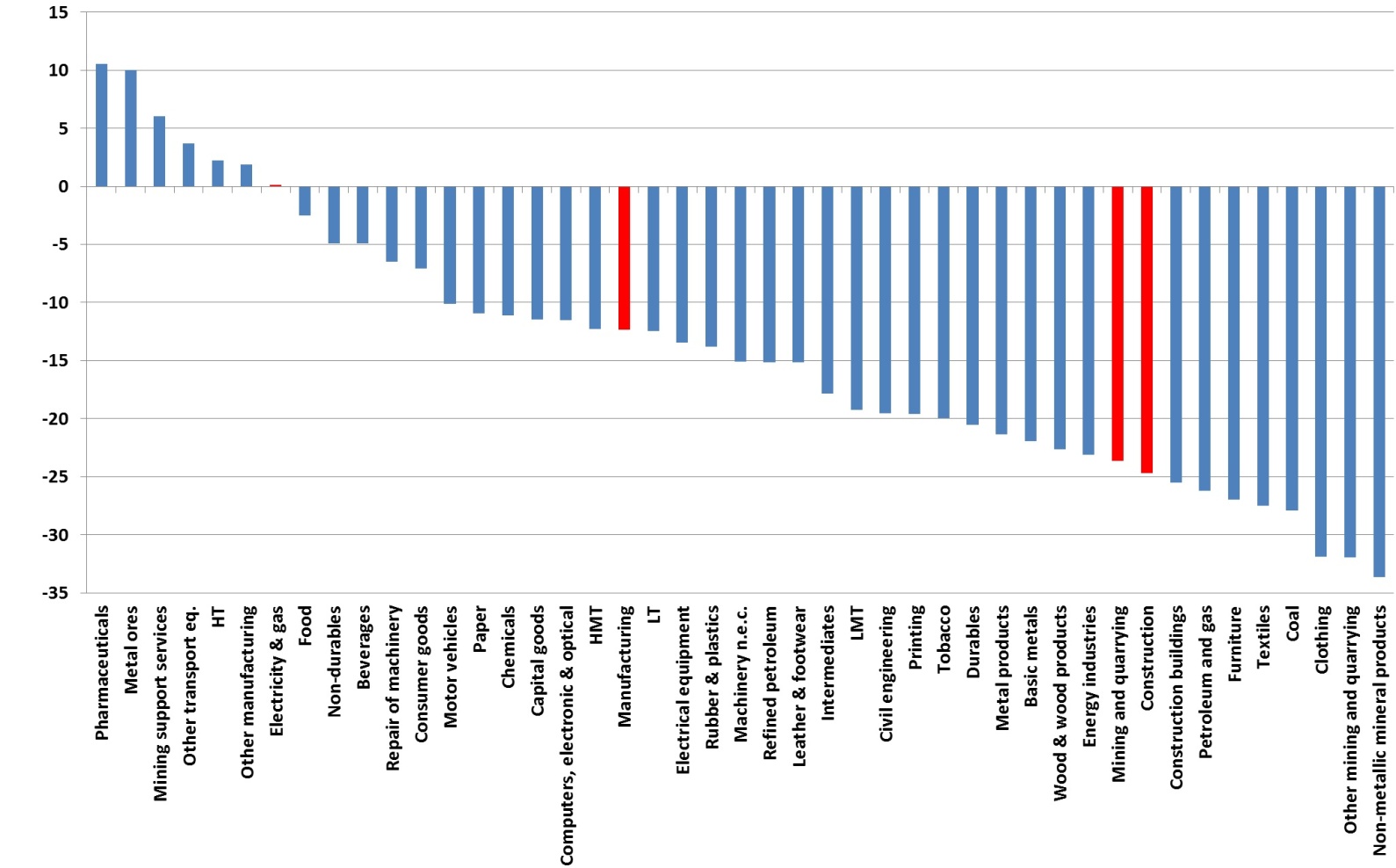 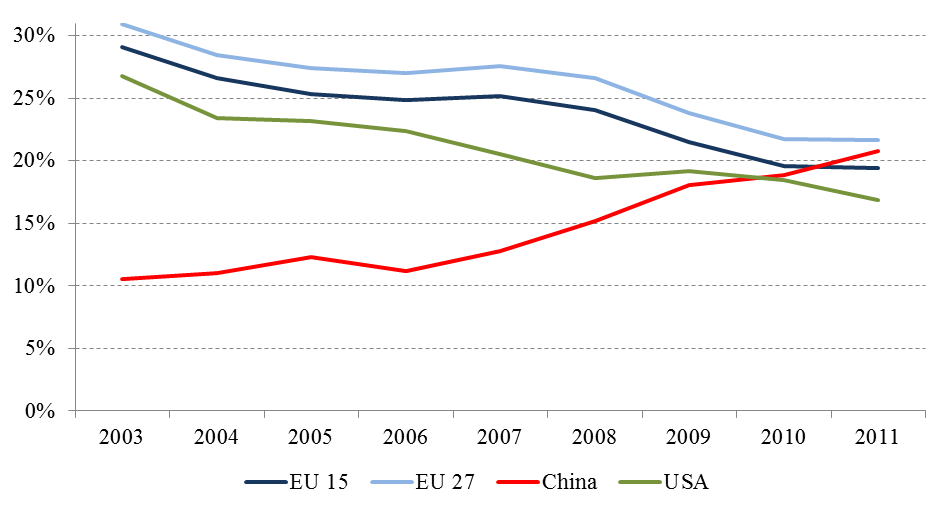 Looking beyond the crisis, the report identifies main reasons for maintaining a ‘critical size’ of manufacturing activities in European economies. It also identifies sources of EU comparative advantages that need to be preserved and upgraded, as well as long-term structural weaknesses in manufacturing that need to be addressed. The main findings and recommendations are as follows:

1.                 Manufacturing is increasingly seen as a pivotal sector, although the weight of manufacturing in the EU economy is decreasing in favour of services. A critical mass in the form of a minimum production base is needed, because:

·                    A declining manufacturing share erodes the knowledge and technology base of the whole economy, which is crucial for achieving sustainable development

1.                 Europe has comparative advantages in about two-thirds of the industrial sectors, accounting for around 75 percent of EU manufacturing output. these comparative advantages are concentrated in complex and high-quality product segments. By gradually increasing the complexity of their products, EU manufacturing industries managed to maintain their competitive position through the crisis. For example, the EU is a major producer of new knowledge in (KETs), the technological building blocks that will be used to construct any new technology or innovative high-tech product in the years to come. Its products based on industrial biotechnology or advanced materials have higher technology content than competing North American or East Asian products. The challenge for Europe in this area is that apart from advanced manufacturing technologies, EU products based on key enabling technologies are mature and need to compete on price.

2.                 In a globalized world, so-called ‘value-chain performance’ is becoming a more important measure of competitiveness than the traditional emphasis focused mainly on exports of finished goods. In this respect, the technology advantage of the EU is reflected by the fact that EU manufactured exports have less embedded foreign value added than exports by third countries such as China, South Korea, Japan and USA, which need to source hi-tech intermediate goods from abroad to a greater extent than the EU. Conversely, the EU has a higher share of value added in the exports of these countries. According to the most recent figures available, around 86 % of the value of EU exports is domestically produced, compared to 74 % for China, 85 % for Japan, 61 % for South Korea and 84 % for the US.

It is important to make EU enterprises more competitive on the global market. The report's findings suggest that:

·                    EU industrial policy needs to steer structural change towards higher productivity in manufacturing and better positioning of EU enterprises in the global value chain. In doing so, EU should rely on its existing strengths of manufacturing, namely its advantages in knowledge and technology intensive products and services. An example of this is key enabling technologies (KETs).

·                    But the EU is lagging behind in productivity gains relative to emerging industrial powerhouses and some of its major competitors such as U.S. and Japan (IP/13/270). The EU-US productivity gap, for instance, is growing wider again after years of narrowing. Part of it is accounted for by an efficiency gap caused by regulations, or underinvestment in ICT and intangible assets. Another part is explained by slower market uptake of research output (commercialisation of research gap). Demand-led policies and measures to stimulate research and development cooperation can help bridge such gaps.

·                    Structural change is slow, path-dependent and inefficient if it does not build on existing strengths. It can be fostered by having the right institutional framework in place covering education, research, technology and innovation policies but also the quality of governance.

Industry vs. services: why it is important to strengthen both

Figure 5A. Declining share of manufacturing in EU GDP

In spite of longer-term trends in advanced economies of the manufacturing sector accounting for a shrinking share in value added and in employment, there is a strong case for preserving a ‘critical size’ of manufacturing activities in European economies. There are very important ‘backward linkages’ from manufacturing to services which provide important inputs for manufacturing (in particular business services). Thus, manufacturing has a ‘carrier function’ for services which might otherwise be considered to have limited commercial value. In the same direction goes the increased ‘product bundling’ of production and service activities in advanced manufacturing activities. This ‘carrier function’ – through international competitive pressure – has furthermore a stimulus effect for innovation and qualitative upgrading for service activities. Because of this increasing cross-over (Figure 6), when manufacturing is struggling this has a very negative impact on services sector and on the overall economy and jobs.

A few market service sectors were the main cause of the EU productivity disadvantage in comparison to the US during the era of the emergence of information and communication technologies (in the late 1990s). However, in the years leading to the financial crisis, the EU experienced strong ICT-related labour productivity growth in these sectors, mirroring earlier developments in the US, thus reaching the US productivity levels. Since the crisis however, the EU-US productivity gap has widened again (see Figure 7). 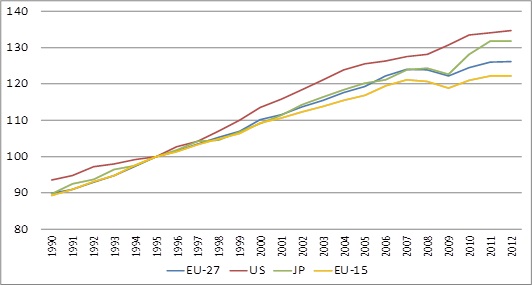 Moreover, the EU is generally perceived as being less effective at bringing research to the market than its main competitors such as the US, Japan, and South Korea. This has contributed to the so-called 'innovation gap' which threatens to undermine EU competitiveness, employment and growth (Figure 8.)

Figure 8. The relative technological advantage of US over EU in high-intensity research and development sectors 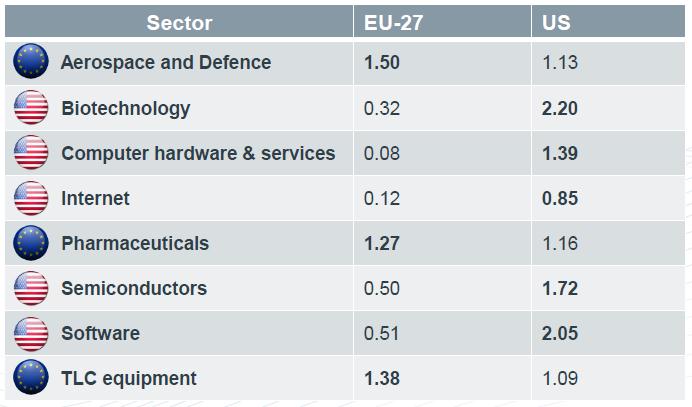 It is widely accepted that Europe does not lag behind the US in terms of scientific excellence. For example, in the sector of key enabling technologies, European patent applications are increasing year to year and the share of European applications remains relatively stable. But knowledge production is not synonymous with job creation and growth. In order to turn patents into marketable products based on key enabling technologies, manufacturers need to be ideally positioned in terms of the technology content of their products and in relation to the competition they face on the global market.

Figure 9. Shares of patent applications in Europe and other countries

In an effort to overcome the obstacles on the way to successful market deployment of European innovations, a wide range of policy measures have been developed at regional, national and EU level. These policies have aimed at stimulating innovation, shorten the innovation cycle and improve innovation and commercialization performance in companies. However, despite a broad spectrum of policy support instruments, there is still a lack of research commercialisation in the EU, and hence that there is still a need to identify more effective measures or improve existing ones.

Focus on governance: more action needed on a European level

The preservation of the ‘industrial commons’ includes nurturing manufacturing-services inter-linkages and exploiting specialisation advantages of different European economies. State aid measures to support structural change and structural adjustment have so far been used predominantly at national levels and did not rely much on the coordinated use of state aid tools. In a highly integrated European economy, the preservation and development of ‘industrial commons’ should be seen as a joint responsibility because of strong externalities across the European economy. Such joint responsibility for ‘industrial commons’ includes rules for quality assurance and recognition of qualifications, supporting the mobility of skilled staff, learning from successful cluster policies, support for necessary transport and communications infrastructure.

Industrial policy at the EU level should ensure that Europe has a broad and diversified industrial structure which is well-equipped to be a major actor in the development of new areas of activity such as environmental technology. In this it is able to benefit from the diversified character of European industrial and demand structures and benefit from the pooling of resources. This encourages also innovations in existing areas in which Europe draws on its specific comparative advantages, be they based on traditions of production specialisation (fashion in France and Italy, high-quality mechanical engineering and transport equipment in Germany and in a number of the Central European economies, quality food production) or on a diversified pattern of private and public demand (strong position of public transport, of high-quality health services or linked medical devices and pharmaceuticals).

Given the strong political commitment of the EU to environmental protection and the mitigation of climate change, a long-term industrial policy targeted at the development of ‘clean’ products and technologies could well form the base for a major industrial policy initiative. Importantly, such a strategy should not only include a long-term funding commitment for research but also needs a reliable source of demand that should be provided by public procurement of EU Member States and the EU itself.

The industrial policy strategy laid out in the (European Commission, 2012a) goes in the same direction as five of the six priority areas (priority action lines) defined in this Communication are related to meeting the challenge of climate change and the degradation of the environment. It remains to be seen whether public procurement will have any role to play in the EU’s policy initiatives for stimulating the commercialisation of innovations and the development of green and more resource-efficient products.

Furthermore, industrial policy has to be attentive to the different needs of countries and regions at different levels of economic development.

DEMO METAL West is based on the "DEMO" concept, considered to be the most important event in Romania for the metal working industry specialists. Seen as a Western event, DEMO METAL is the place where metalworking industry leaders present their latest inno